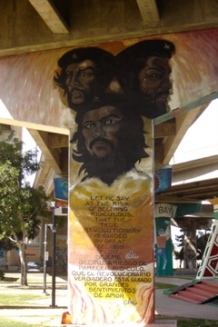 Painted stories line the walls of Chicano Park in San Diego’s Barrio Logan: a multitude of arms embracing the earth, an infant sitting in the palm of one’s hand, faces of dictators from years past. The murals serve as reminders of the justice Chicano activists sought when trying to preserve their land and heritage in the early 1970s. A message painted on a pillar supporting the highway built above the park reads: “Dejame decirle a riesgo de parecer ridiculo, que el revolucionario verdadero esta guardo por grandes sentimientos de amor.” Translated, it reads: “Let me say at the risk of seeming ridiculous, that the true revolutionary is guarded by grand feelings of love.”

Chicano Park is located just a few minutes away from where one of my best friends, Colleen, is volunteering for the year. I visited her this past weekend and caught a glimpse of what life is like in the predominantly Mexican neighborhood where she lives. The experience of spending just a weekend in her neighborhood led me to see what it was like to live in a place where I was a minority, where the faces on the walls, in the buses, on the streets, were not like my own.

With my blond hair and blue eyes, I stood out among the others on the public transportation Colleen and I used to get from place to place. Since Colleen doesn’t have a car in California, we rode the bus, the trolley and our bikes all weekend. In doing so, we saw the city from a different perspective than if we had ridden in a car. We walked through Chicano Park and studied the murals rather than driving along the road that runs through the middle of the park. We sat on the bus and interacted with the locals, who yearned for five-minute friends.

One elderly Asian woman at the trolley station held up a Padres pillow that someone had given her. She seemed overjoyed with the gift and alluded to the fact that she would sit on it while waiting for the bus. She asked who the Padres were and let out a resounding “Ahhhh” when we told her that “Padres” is the name for San Diego’s baseball team. The next day a homeless man walked up to me in a coffee shop to say he had “lost it all.” He lost his lover, his home and his money. He was once on medication but said he couldn’t afford it anymore. “I’m a Christian, I’ve got faith” he said, and walked away.

Though only a few minutes long, these conversations served as a reminder of people’s need to be heard and of the desire many of us have to share our stories with someone who will listen, no matter the color of our skin. Journalists have the ability to listen for these stories and tell them in such a way that they speak to a greater truth about the world in which we live – a truth about homelessness, poverty, one’s struggle for survival, etc. By riding the bus and by observing the details on the murals in Chicano Park, I saw diverse faces and heightened my chances of hearing diverse voices and stories.

Journalists could learn a lot from the practice of walking around parks and taking the bus in a community where they may feel as though they don’t belong. Some of the best stories are those in which journalists immerse themselves in the culture and lifestyle of those they are reporting on. When we shadow the people we cover and look at life from their perspective, when we act as conscious observers of the world, we change our experience of the story we are reporting. We don’t become part of the story, but we deepen our understanding of its meaning and importance to the diverse communities we cover.

What kinds of stories, if any, have you found from walking around or taking the bus?

2 Comments to “Diverse Routes: Taking the Bus, Walking with Friends”

Leave a Reply to Where to Go When Visiting Minneapolis? « Word on the Street Cancel reply