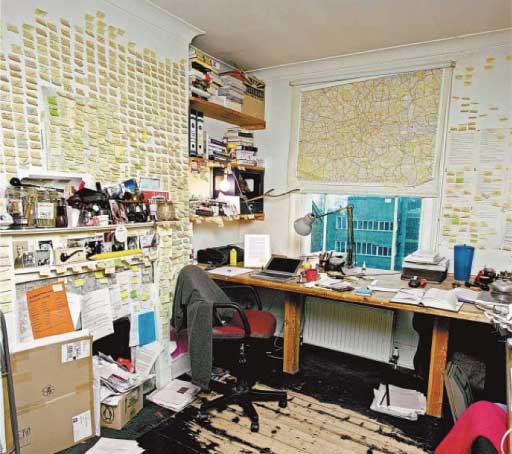 Will Self’s writing room — note all the Post-its!

I’m in love with writing outside. While in college, I used to sit outside the library against a large stone that served as my backrest. Though it wasn’t the comfiest place in the world, it was the place where I wrote some of my greatest college essays and where I did my best studying.

At times I got distracted – too many people walking in and out of the library could make for hours of great people-watching and listening, but the distractions helped me. I’m an organized person and like things to be in their place, but when I write, I need some dishevelment and distractions.

When I studied in the library at night or during the winter months at college, I would always read the dozens of scribbles on the cubicle walls. My mind would wander as I wondered whether calculus still sucks or whether Johnny still loves Whitney like he did back in 2003 when he dotted the “i” in Whitney’s name with a heart.

When writing, I like listening to music or glancing up every now and then and seeing cars drive by or hearing people talk. As I write this post from my porch, I’m smelling the barbeque my next-door neighbor is cooking, I’m listening to Rihanna’s “Hate That I Love You,” I’m watching an occasional car drive by (a cool red moped just sped down the street), and I’m feeling the dampness of the rain on the couch cushions I’m sitting on. Wow, just now a woman walked by the apartment complex talking to her dog about how much she thinks people here (at the apartment?) are rude. See, I never would have heard that if I were sitting inside!

But there’s something to be said for sitting inside, especially when you have a special room for writing. There’s a neat site I found when reading Snarkmarket that has photographs and descriptions of different writers’ rooms. My favorite rooms belong to Seamus Heaney, Antonio Fraser, and David Lodge. I like Heaney’s room because it’s in an attic. Attics emit an aura of mystery and history. They’re the place where trinkets are stored and treasures grow. I would think that such an environment would foster great story ideas.

Fresh air keeps the ideas flowing, too. I like Fraser’s room because of the wide open window and all the books, and Lodge’s room is cool because of the emphasis he places on his chair. Check out Lodge’s chair, which is “ergonomically state-of-the-art,” compared to Colm Toibin’s chair, which is “one of the most uncomfortable ever made.” Toibin adds, “After a day’s work, it causes pain in parts of the body you did not know existed.” Writers have their own ideas about what works for them.

Edna O’Brien doesn’t have a computer in her writing room. “I write by hand. I do not understand how people can arrive at even a flicker of creativity by means of a computer,” she says. Sarah Walters, on the other hand, says, “All I need in a study is a flat surface, a computer, and a closable door; a large ward- robe would probably do.”

Here is my writing room: (My personal photos haven’t been uploading correctly…)

What do you need/like to have in your writing room? If you don’t have a room designated for writing, do you want one, or do you just like writing anyplace, anytime, anywhere?

2 thoughts on “A Glimpse Inside Writers’ Rooms”