Throughout the years I’ve gotten used to people misspelling my name. My late aunt seemed to spell it differently every time she wrote me a Christmas or birthday card, and teachers used to misspell it, too. In the third grade I started to write “Mal” on top of my papers to avoid confusion, but my mom didn’t approve.

“Mallary, stop that,” I remember her saying. “Write your full name and be proud of it.”

I love the unusual spelling of my name, but I’m continuously surprised by how many people misspell it. Several editors recently spelled it wrong, prompting my editor to suggest that I write about the experience. To find out more about misspelled names, I got in touch with Regret the Error’s Craig Silverman, who said they’re the sixth most common newspaper error. The error is so common, Silverman said, because journalists forget to ask for the right spelling, they do it from memory, they assume the name is spelled the “normal way,” or they’re misled by incorrect sources online.

When it comes to misspelled names, sources may assume that if a reporter got a name wrong, he or she may have gotten other more significant facts wrong, too. And if you’re the source whose name was misspelled, you can’t help but wonder just how much the journalist who interviewed you really cared. Names are a part of who we are, so we feel disrespected when journalists don’t take the time to spell them right.  You can read more about this in my story …

The story generated a lot of discussion — I think because so many people can relate to having their first and last names misspelled. Here are just some of the misspellings readers shared with me on Twitter and Facebook:

David Folkenflik & Eric Deggans — Both had their names misspelled by their own publications.

I was surprised when a couple of readers said that my parents are to blame for spelling Mallary “the wrong way.” One reader, for instance, tweeted: “Good story, will use it in my journalism classes. But, I’m sorry, your mother spelled your name wrong, you pay the price.” (He since removed the tweet but made a similar comment on my story.) I responded by saying that Mallary with an “A” isn’t wrong; it’s just different from the norm. 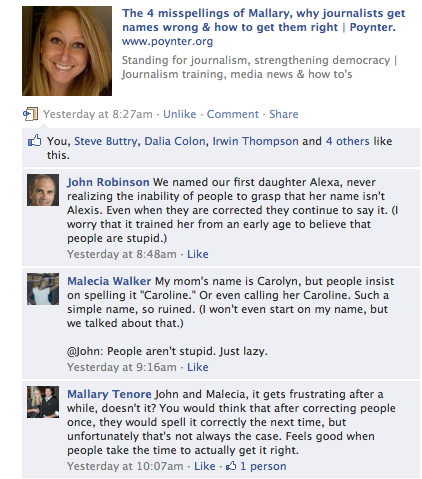 How has your name been misspelled?