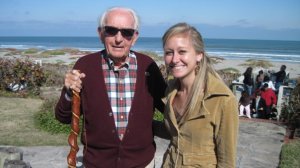 I’ve been lucky enough to have some great mentors throughout the years, many of whom graduated from my alma mater, Providence College. Last weekend, I drove across the state of Florida to visit one of them.

John Quinn, who graduated from PC in 1945, 62 years before I did, held a Chips Quinn reunion at his Cocoa Beach home, where a group of local Chips Quinn scholars gathered to talk about their work as journalists, the low morale in their newsrooms and the entrepreneurial journalism opportunities they’d like to pursue.

Quinn created the Chips Quinn scholarship program in memory of his late son in hopes of bringing more diversity in today’s newsrooms. It’s worked, as about 1,200 scholars have gone through the program and been given journalism internships. Mr. Quinn likes to call me an “honorary Chipster.” I received a John C. Quinn scholarship in his name at PC, so he often invites me to the Chips Quinn reunions and other related events.

I’m grateful for his help and for how willing he’s been to help me when I’ve needed career advice or someone to share ideas with. Someday I hope to return the favor to other young journalists. Everybody needs a mentor, especially one who motivates you to be better at what you do and reminds you that, yes, the work you do as a journalist matters.