On a ‘Running High’ after Finishing the Disney Princess Half Marathon 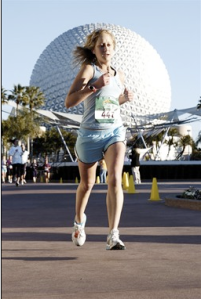 Just about to approach the finish line at Epcot.

My wake-up call was much too early. Saturday night, I went to bed at 8:30 p.m. and set my alarm for 3:15 a.m. — the time I usually go to bed on Saturday nights. The Disney Princess Half Marathon was starting at 6 a.m. the next morning, and my friends and I had to be at the starting line by 5:30 a.m.

Why in God’s name, I asked myself, was I waking up in the middle of the night to run 13.1 miles? Was I crazy?

Maybe. But after flipping on the light switch, splashing my face with water and eating some toast and peanut butter, I was awake enough to get excited about being a running princess, if only for a day.

In the days leading up to the race, I was pretty worried. How well would I do? What if I couldn’t fall asleep the night before? What if I got cramps in the middle of the race? I spent months training for the race, and had run more than 13 miles, so I knew I could do it. Running is so mental, though, so it’s easy to let doubt impede your speed.

It helped to be in the company of two of my closest friends — Linsey and Colleen. They both flew to Florida from Massachusetts to run in the race. Linsey’s mom, my high school cross-country coach, also ran in it and warmed up with me at the starting line. I told her I wanted to finish the race in two hours, but that so long as I finished my first half marathon, I’d be happy. 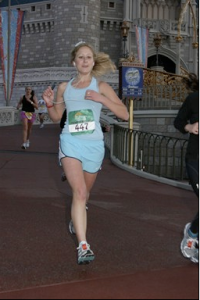 Running through the Magic Kingdom.

When the race began, I felt strong. I started out running an 8-minute mile and continued at this pace throughout the race, finishing it in an hour and 45 minutes. Colleen came in about the same time I did, and Linsey ran it in an hour and 27 minutes, placing 9th out of nearly 13,000 runners. (Pretty amazing!)

Crossing the finish line gave me such a great sense of accomplishment and made me remember why I spent so much time training. All those mornings I woke up to run when I would have liked to have just stayed in bed had paid off.

Now, five days after the race, I’m still on a running high. I want to train for another half marathon, like this one in Minneapolis. There’s also one in Boston this spring that I’d like to run, but I should really be focusing on swimming, not running, over the next month-and-a-half. I’m part of a relay team for the St. Anthony’s Triathlon and need to train for a mile-long, open water swim on April 25. Eek. Time to kick my aquatic training into gear! I like swimming, but it’s not usually something I look forward to doing.

After running the Disney Princess Half Marathon, all I really want to do is run. …