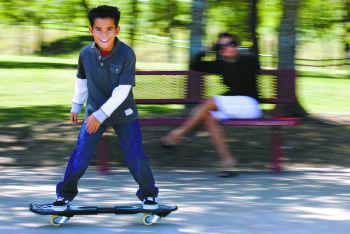 I’ve always enjoyed interviewing children, mostly because they get excited about talking to reporters. No cold shoulders. No “off the records.” No shameless plugs. In the past when I’ve covered school events, all the teacher had to do was introduce me as “the lady from the paper” and children would swarm me. “What are you writing about?”, “Do you work for the newspaper?”, and the most frequently asked question: “Is my name going to be in the paper?!”

“Maybe!” I’d usually say, not knowing how many of the quotes I’d use.

While children are often enthusiastic to talk, they challenge journalists’ ability to ask good questions. If you ask a child a yes or no, close-ended question, they often reply with a one-word answer. So, I try to ask open-ended questions. Instead of “Did you have fun at the show?” I rephrase this question and ask: “What did you like best about the show?” or “Tell me about the show.” Sometimes, all you get is, “It was really fun,” but keep prodding. “What was really fun?”

This week, I interviewed a rising star, Bryce Cass. The 10-year-old from Rockwall, Texas, is one of the five children on this season’s Are You Smarter Than a Fifth Grader? When I met him and his mother, Terry, I was struck by how close they seemed. At one point during the interview, Terry began to cry when I asked her how proud she is of her son. Bryce ran over to her and threw his arms around her neck, pressing his face against hers. “It’s OK, Mom,” he told her. It was a beautiful moment that I wanted to include in the narrative. When interviewing Bryce and Terry, I didn’t want to record what they told me so much as I wanted to relay what the mother-son pair said to each other.

Stories about kids can make for wonderful narratives, in part because kids have so much energy and interesting things to say. If you’re not getting anywhere with your interview, sit back and listen. Watch children interact with each other or with their families. What are they saying to each other when they’re not talking to “the lady from the paper”? Capture these conversations.

Click here to read the story I wrote about Bryce.

And here is the latest story from the ballet beat.

Weigh in: Do you find that kids are open to sharing their stories, or have I just been lucky?