I wanted to give you a quick update on my blog post about cooking one homemade meal a week. I haven’t been cooking as much as I’d like, but I have made some of the dishes I blogged about, and I’ve been trying to make more of an effort to prepare different meals for myself instead of eating the same thing every night.

In the past month or so, I’ve made cilantro and lemmon hummus, mushroom burgers, garlic green beans, pasta salad, and a birthday cake from scratch. Of all the veggie burgers I’ve made, these mushroom burgers were the best. They fall apart easily when you’re cooking and eating them, but they’re simple to make and they definitely satisfied my vegetarian cravings. They have a pretty strong mushroom taste, so you may not like them if you’re not a big fan of mushrooms. I’d still recommend giving them a try, though.

Below are photos of some of the dishes I’ve made. …

I served the mushroom burgers with a side of garlic green beans. They looked a little wilted, but they still tasted good! 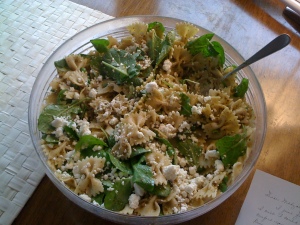 Here's a concoction I came up with myself: Bow tie pasta with arugula, red peppers, goat cheese, pine nuts and pesto. Yum.

This is supposedly "the best birthday cake ever," according to the recipe. I'm not sure I would give it such a high accolade, but it certainly tasted good. Next time, I would make each layer a little thinner.

Creativity Comes out at Cupcake-Making Party

Me having fun at a recent cupcake-making party I hosted.

Last month, my best friend from home got me a cupcake-making book for my birthday, along with some matching cupcake napkins. I had seen the book, “Hello Cupcake!” several times before but had never bought it. I wondered if I’d ever have an occasion to make such elaborate cupcakes and figured I’d just get some recipes online. But having the actual book and sharing it with others is so much better.

This is what happens when you invite friends to your apartment to make cupcakes. 🙂

I posted a Facebook update about the book, saying I was tempted to have a cupcake-making party. Mention “cupcake” on Facebook and you’ll get lots of responses. Mention it in real life and you’ll see a lot of wide-eyed eyes and ooing and ahhing. Based on the positive responses I got, I decided to host a cupcake-making party in place of the usual get-togethers that I have every month with the craft club I’m in.

I bought a variety of toppings — Reese’s pieces, butterscotch morsels, vanilla morsels, M&Ms and more. And I bought ingredients for “sunflower cupcakes” — the seemingly simplest cupcakes to make from the book. (Many are elaborate and require a visit to a baking store.)

I baked the cupcakes the night before so that when friends from the craft club came, they could just focus on decorating them. We made the sunflower cupcakes with yellow frosting, Oreos and a red M&M with chocolate frosting for the ladybug on top. We also made owl cupcakes, lion cupcakes and caterpillar cupcakes. Naturally, they were all delicious. 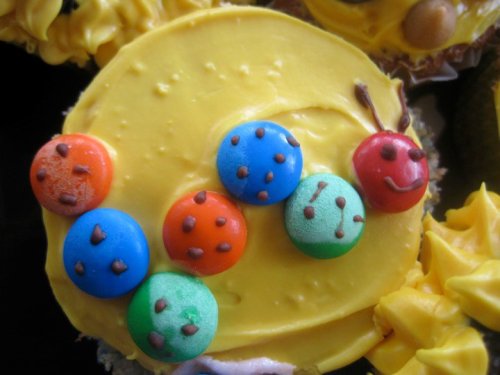 Cuteness. We made butterfly cupcakes, too.

The food from a dessert and wine party that my friend and I hosted earlier this year.

I’m trying to get better at cooking for myself. It can be tough when you work late and don’t feel like “working” more in the kitchen when you get home. But I know some people who say that cooking relaxes them and gives them the chance to be more creative when it comes to food. I want that to be the case for me, too.

I’ve found that weekends are a good time to experiment in the kitchen, as are late nights when I’m forced to cook for a potluck or a get-together the following day. In recent weeks, I’ve done my fair share of late-night baking and even managed to set off the sensitive fire alarm in my apartment twice — both times after midnight. Oops.

Here are some recent recipes I’ve tried and would recommend: 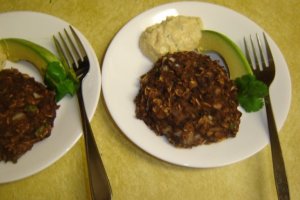 Cilantro and lemon hummus and tomato basil hummus: I’ve tried several of the About.com hummus recipes, but these two have been my favorite so far. Sometimes I’ll make the hummus to go with black bean burgers.

Barley, corn, and haricot vert salad: This salad is really simple to make, and it tastes pretty good. The dressing has an unusual taste, given that it contains Dijon mustard, shallots, red wine vinegar and olive oil, so you might want to put it on the side and let people sample it first.

Butternut squash risotto: I made this for the Thanksgiving feast I had with friends last month. You can’t really go wrong with Giada De Laurentii’s recipes. After interviewing the Italian cooking pro last year in Dallas, I became an even bigger fan of her food and her approach to cooking.

Giada’s butternut squash risotto recipe calls for a vanilla bean, but you could probably just use vanilla extract. I used a vanilla bean because I had never cooked with one before and wanted to see what it was like. The beans come two per pack and cost $5 a piece. They’re expensive, but I loved the added vanilla flavor they added to the risotto. 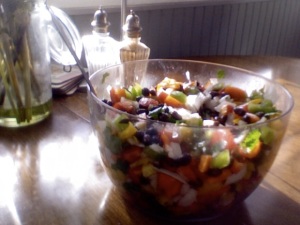 Black bean confetti salad: Again, a simple salad to make, and a great one for the summer. If you’re looking for some other quick salad options, check out these recipes on SmittenKitchen.com, one of my favorite cooking blogs.

Double chocolate-cherry espresso drops: I made these for a cookie exchange I hosted last weekend, and they came out pretty good. I  didn’t use the instant espresso powder that the recipe called for because I couldn’t find any in the store. I’m sure you could improvise, though, and just grind up some coffee beans for added flavor.

OK, so they weren't the prettiest looking cakeballs. But looks can be deceiving ...

Cakeballs: A group of my friends and I got together last year to make these tasty — and sickingly sweet — treats. They’re especially fun to make and decorate around the holidays. Just make sure you have a lot of time … and patience.

What recipes have you tried lately? 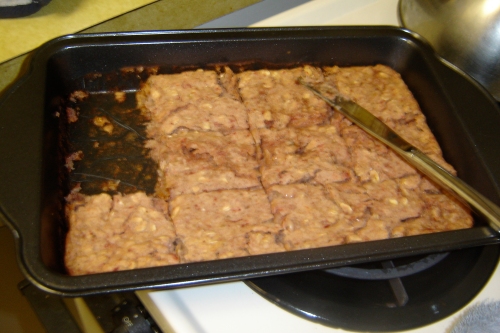 My roommate and I, both vegetarians, started a new Sunday night tradition: making veggilicious meals. This afternoon we experimented with beans and made black bean veggie burgers and Vegan white bean strawberry blondies.

The burgers were so much better than the frozen Garden Burgers I always eat, mainly because they were more filling and they tasted a lot fresher, thanks to the chopped onion and cilantro. Mixed together, the black beans, green cilantro and white onions looked like an earthy tone hodgepodge of deliciousness.

Questioning the deliciousness of breadcrumbs, we substituted them for oatmeal, which seemed to work just as well taste-wise. The oatmeal made the veggie burgers a little mushier than they would have otherwise been, but I liked the mushiness. Since they may have been a little too mushy for buns, we used a fork and ate them with a slice of avocado and a side of hummus I made yesterday. Forget mustard or ketchup.

The brownies were just as tasty. Beans in brownies? Sounds a little strange, I know, but don’t let the beans deceive you. The brownies don’t call for any sugar or oil, and though they probably wouldn’t satisfy a sweet tooth, they’d satisfy a smoothie lover, as they taste like smoothies but in brownie form. The sugar from the jam, bananas and honey (a cheap substitute for the maple syrup the recipe called for) gives them an added sweet flavor. Both the bean veggie burgers and brownies took less than a half hour to make.

The speediness of the cooking process and the tastiness of the food proved that veggie/Vegan foods can be favorable, filling and fun to make. Don’t believe me? Whip up some of these veggie burgers and bean brownies and you’ll have a different opinion — and your fill of protein, fiber and iron for the day.

Having a Ball Making Cake Balls

Some of the dozens of cake balls my friends and I made.

I recently joined a craft group that some St. Petersburg Times folks started last fall. Joining the group has given me an excuse to rekindle my creativity by doing origami, making earrings and more.

I hosted the last craft party and spiced it up a bit. In place of a traditional craft, my friend and I suggested that the group make cake balls — sickeningly sweet treats that are fun to decorate and even more fun to eat. I figured this would be a fitting food for us to make, seeing as you can be crafty when it comes time to decorate the cake balls with chocolate almond bark and colorful sprinkles.

I first found out about cake balls while interning in Dallas last summer. The woman I lived with, who was The Dallas Morning News‘ assistant food editor at the time, edited a story about them and decided to make them on her own. I think this may have been one of the best decisions she made while I was in Dallas. I jest, but they were so delicious I felt compelled to re-satisfy my cravings for them and introduce other people to their addicting sweetness. (Note: the story I linked to above includes cake ball recipes.)

Apparently, they’re pretty popular in Dallas; a new cake ball company just opened there. They cost far too much to buy, though. Better (and cheaper) to make them in your own kitchen with the company of friends.

After looking at that picture I posted, how could you not want to make some?

Baking Pies, In a Makeshift Kind of Way

I convinced myself that I was well-prepared.

Nutmeg? Check. Flour? Check. Six plump peaches? Check. I had everything I needed to bake two pear pies, or so I thought.

When my friend and I started baking pies at my apartment Wednesday night, we soon realized that I was missing measuring cups. I thought I had them in my new apartment, but alas, I didn’t. They’re one of many things I had to leave behind in my old apartment. So, we grabbed a 12-oz cup from my cupboard and guestimated our way through the recipe. Now, this isn’t the best idea when it comes to baking, but it was getting late and we didn’t have time to go to the store.

When it came time to flatten the crust, we realized we didn’t have a rolling pin. Hmmm. I opened some of the drawers in my kitchen and looked for alternatives. A roll of aluminum foil. Perfect! It didn’t flatten the crust as well as we would have liked, but it worked nonetheless.

When my friend tested out the pears, she puckered her lips.

I tasted a pear and could tell what she meant. It was pretty salty. I mixed the pears and ingredients together some more, which helped a little. A little salt goes a long way, apparently.

My friend and I baked pies at this time last year, and though I was worried we didn’t bake them correctly, they ended up being quite tasty. Tomorrow we’ll see if we can say the same for this year’s pies. I doubt people will tell me if they think my pie tastes bad, so I’ll be watching their expressions when they try it. I never said I was a baker, but I get some effort for trying, right?